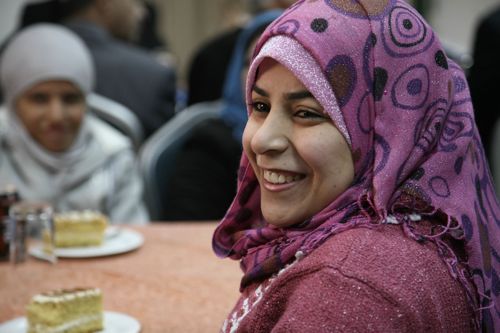 We are here – Assertiveness does it!
Heba

We Are Here, battle cry of the undocumented refugees of the ‘Sanctuary Church’ in Amsterdam is more than just a slogan. ‘We are here’ voices the determination and desire to belong of people worldwide: ‘Acknowledge us as part of society and give us the right to pursue our dreams and ambitions.’ By their courageous decision step out of the shadows and take charge, the refugees have reframed their image from ‘problem’ to ‘people with a problem’. And they made the problem ours. Additionally, their assertiveness evoked admiration and the desire to help.

They’re not unique. The Pakistani teenager Malala Yousafzai received worldwide support for her cause – education for girls – and even won the International Children’s Peace Prize. Through my volunteer work for a small Dutch foundation, I often visit the Gaza Strip, where disabled women, united in the National Centre for Community Rehabilitation, are successfully claiming their place in society.

As a disabled woman in Gaza your life is three times as hard. Not only do you face a suffocating siege, on-going violence and poverty like everyone else, but also discrimination, marginalization and limited freedom of movement. In the highly educated Palestinian society, illiteracy among disabled men and women is 50 percent, partly due to under stimulation and inaccessible school buildings. A staggering unemployment rate of approximately 45 percent in the Gaza Strip makes finding work a daunting task when your limbs don’t function properly – even if you do have a college degree in the pocket. The fairly decent Disability Act, granting disabled people right to education and employment, is rarely applied.

Ignorance rather than malignance is the root cause of their situation. Most disabled women are lovingly cared for by their families but are rarely seen as more than patients. “When I wanted to go to university, people did not understand. What more could I want from life than to stay home, sheltered from summer sun and cold winter rains?” says my young friend Heba, paralysed since childhood and one of the few disabled college graduates. “A right that is not protected, is lost”, Heba continues. “If we don’t claim it, nobody will do it for us. Only we can show society that we are not a burden.” Heba and other women make themselves heard in all levels of society. Young people team up, plan actions, create Facebook pages and magazines. Kifaia, who lost both her hands in a bomb blast, started an embroidery group, which Sausan, a tiny woman with six fingers on each hand, later took over. The club is more than occupational therapy. The money the women make from selling their products strengthens their positions within their families. The preciseness of their needlework and the richness of colours and patterns earn them respect as craftswomen. “I never knew she was capable of this”, the father of a forty year old woman – who up until then had barely left her home – tells a tv-reporter, swallowing his tears. “I’m so proud of her.”

The women round up community leaders, urging them to support their case. In awe I witnessed Zeyneb, a wobbly moving woman with whom I had earlier exhausted our limited mutual vocabulary, address them in a firm voice and with a raised chin. With success. The Gazan dignitaries committed themselves to uphold the women’s rights.

So what about those who are not assertive, media genic or admirable? Are they left to their own devices? If these examples illustrate anything it is that there are strengths and talents in almost everyone. The trick is to identify those talents, facilitate them and create the circumstances for people to thrive.