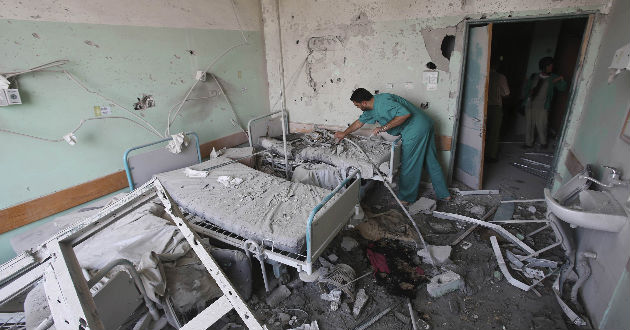 Stop the aggression against Gaza

In light of the continued Israeli aggression and the vicious attacks against the Palestinian people and against medical teams and institutions in Gaza Strip for the eighth day in a row, the number of victims are on the rise with more than 173 martyrs, including 36 children, 1152 injured and full destruction of 568 homes and institutions and partial destruction of thousands of other buildings, as well as targeting medical institutions, the latest of which was damage incurred by PMRS’s own Center for Chronic Disease in central Gaza as a result of continued bombing.

Palestinian Medical Relief Society (PMRS) values the continuous efforts of medical teams working in the field in light of this barbaric aggression, and the way they handle the different injuries despite ongoing Israeli targeting, shortage of various kinds of medications and medical disposables and continued power outage and shortage of fuel.

PMRS strongly condemns the increasing Israeli crimes against the Palestinian people and against medical institutions and calls upon the international community with all its institutions to act quickly in order to pressure the occupation to stop its aggression against Palestinians and to provide necessary protection especially to women, children and medical teams, according to international treaties.

PMRS appeals to the Arab and international community to provide aid and to act fast in order to get medicine and medical equipment to Gaza Strip in order to support the medical teams in handling the huge numbers of injuries and patients.