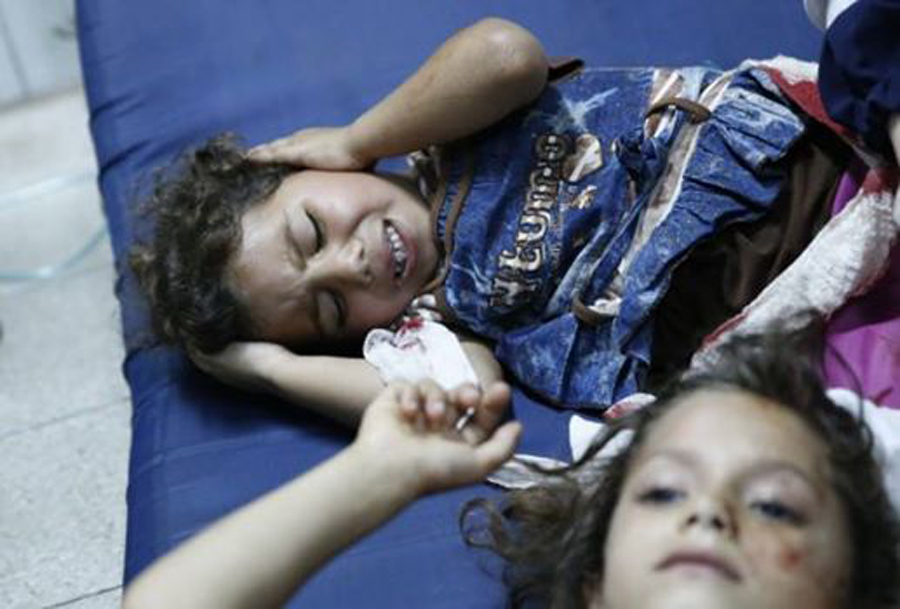 In spite of announcing a one sided ceasefire for four hours on Wednesday afternoon, Israel committed another massacre against al-Shejaeya neighborhood.

An Israeli tank shell was fired at a busy market near a gas station, hitting fuel tanks of the station and killing an injuring a number of people. When people gathered to assist the injured, Israeli tanks bombed again. The toll is 17 dead, and more than 150 injured.

The humanitarian situation deteriorates
Electricity supply to Gaza Strip is down to zero hours per day after Israel has bombed Gaza’s one and only power plant. For the third day in a row, Gaza is in the dark. In return, many places cannot get water as pumping it requires electricity. In addition, mobile and internet services are very limited and are about to be cut off in light of the absence of electricity.

In addition to bombing the fuel tanks of the Gaza’s power plant, which will require long months to repair, Israel has also destroyed most of the Israeli electricity lines supplying power to Gaza.
Right now, we’re working using electric generators, but even fuel for generators may not be available all the time as the crossings are closed, so we’re not sure how long we’ll be able to stay connected.

How the health sector is coping
In light of the large numbers of victims arriving at all health facilities, there has been so much pressure on the staff, especially due to the severe shortage in medications and medical disposables. On Wednesday, and as a result of the Israeli massacre in Al-shejaeya market, sixty surgeries had to be performed at al-Shifa hospital. Medical staff operated in ten operation rooms from 6:00 pm to 4:00 am the next morning and carried out 60 surgeries in spite of all the shortages facing them.

Another problem that is facing hospitals is the lack of space. Last week, health officials announced that the morgues were too full and there was no room for any more dead bodies. Martyrs arriving to the hospital are placed at other departments while waiting for room in the morgue. In the meantime, many of the injured are treated while lying on the floor as there are no free beds.

Staying alive
And while people are trying to survive this ordeal, and having to cope with the fact that they have no electricity for their refrigerators, they have started buying their food on a daily basis. This has become a hassle though. Lines to purchase bread are extremely long and food shelves in the markets are empty as suppliers are unable to reach these stores.

Palestinian president announces Gaza a disaster area
Palestinian President Mahmoud Abas, in a letter to the UN, has declared Gaza Strip a disaster area, calling upon the UN to take up its responsibility towards the people here and to provide safe shelters for the people.

So far, more than one quarter million people have fled their homes and took shelter and UN-run schools. So far, Israel bombed two of those schools, the last of which was during the early morning hours of Wednesday, when three missiles hit a school in Jabalia, targeting classrooms, killing 17 people, including a one year old child and injuring many others. The UN has numerously informed Israel of the coordinates for its schools.